The results of Challenge 2 were announced and unfortunately I didn’t make it to Challenge 3. I was pleased I got as far as I did in the contest and thoroughly enjoyed my participation. I’m looking forward to supporting my fellow contestants in the third challenge and can’t wait to see what they come up with.

To see the nine quilters who made it to the final round, visit http://www.mccallsquilting.com/contests/Quilt_Design_Star_2012_Amateur.html.

Thanks especially to McCall’s Quilting magazine for sponsoring the contest, and to all of you who voted and encouraged me!

Now it’s back to work on quilts for friends and family!

Voting for Challenge 2 in the McCall’s Quilting 2012 Quilt Design Star contest has ended and we should know the results later today or tomorrow.

I so appreciate everyone’s support, votes and encouragement as I make my way through the contest.

I’ll let you know as soon as I know! 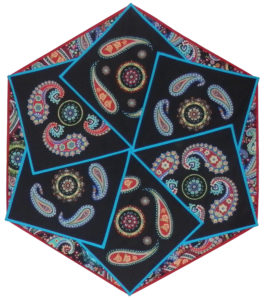 I’ve had a lot of inquiries about how I put my McCall’s Quilting Challenge 2 quilt together and also a request to see a more detailed version.  Ask and you shall receive!

I started with the six black fabric squares, which were 12″ x 12″. I fussy cut the motifs from the featured fabric. I cut them out about a half inch larger all around the fussy cut, and applied fusible to each piece. I then trimmed them down along the edge of each motif. This was a real test for my eyes! The edges of each of the motifs have very small ins and outs. While I was tempted to just cut straight across the motifs, I was happy that I took the time and made the effort to be more precise. I then laid out the motifs on each of the blocks.

Once I had a general idea of where I wanted everything to go, there were a few additional fussy cut pieces I had to do. For example, some of the paisleys went to the left and some to the right, including some that were the same in color and size. I wanted each set of paisleys on a square to go the same way, so I had to tinker with it a bit. I also wanted the opposite blocks to match, or at least be similar, both in the paisleys and the center circles.

After getting all the right pieces in all the right places, I had to figure out the angle that I needed for each of the squares to overlap equally (six squares times thirty degrees equals 180 degrees!) and mark that angle on each square so I would know the area I had to work with. After marking there was some fine tuning and I was finally ready to fuse the pieces in place.

With fusing complete, I had to add the blue edging to the squares. Although I had thought I would do something similar to binding, I found sewing inch wide strips on and then mitering the corners was a better idea. I folded the strips to the backside of the square and used 1/4″ Steam a Seam II to fuse them down. I can see I’ll be using that product again. It was great to work with.

To complete the piece, I measured the triangles that I needed to create in the paisley fabric to turn the star into a hexagon. Once they were cut, I created the red bias strips on the long side of each triangle and fused it in place. The final step was to fuse the squares to the triangles. Since this could not be quilted for the contest, I had to wait until after it was submitted and accepted before I quilted it.

I haven’t yet gotten to quilt it, but I will in the next few weeks. I’m hoping to enter it in my local quilt show next spring and plan to do echo quilting around each of the fussy cut pieces to make them pop even more.

I’m glad you all are enjoying this piece, and I want to thank you for voting for it and for all of your support!

My Challenge 2 quilt in the McCall’s Quilt Design Star contest has now been posted on their site. As always, all of your votes and comments are appreciated.

Our challenge in this round was to use a particular fabric in a quilt, any size larger than 24″ x 24″, in any style we wished. The featured fabric had to be at least twenty percent of the quilt. I’ve included a swatch of the fabric, which is a busy paisley print from Timeless Treasures.

I’m used to using smaller prints or solids, so this was a bit of a challenge for me. After I stared at the fabric for a while, I did get several ideas and eventually decided on the quilt you see, called Paisley Party.

I got wonderful support from my quilting buddies – especially Jan, Kathy, Becky and Maryam – and Jeff was there as usual cheering me on. He did keep telling me his opinion didn’t matter, but I happen to know he has excellent taste. He did, at one point, label the dining room table with a sign that said “Sewing Annex”.

Feel free to mention the contest to all your friends and relatives; I can use all the votes I can get now that we’re in the thick of the contest. There’s one more round after this one, and I’d love to make it through.