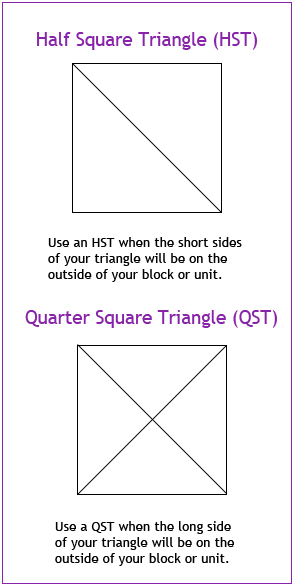 How many times you cut the square not only affects the size of the triangle but also determines where the bias edges of the triangle will be. When you cut a square in half, the two sides that form the right angle of the resulting triangle (the short sides) are on the grain line. When you cut a square in quarters the only side on the grain line is the long side opposite the right angle.

Why are grain lines and bias edges so important? When piecing you want to make sure that the sides of your blocks and block units are not made up of bias edges. If they are “on the bias”, your block may stretch and you won’t get the precision you are looking for.

To make each, take the finished size of the square you want and add:

Many quilters start with larger squares and trim down the finished unit to the proper size. For example, if they want a three inch finished HST, they will start with two four inch squares, instead of two 3 7/8″ squares. Do whatever gives you the most accurate finished product.